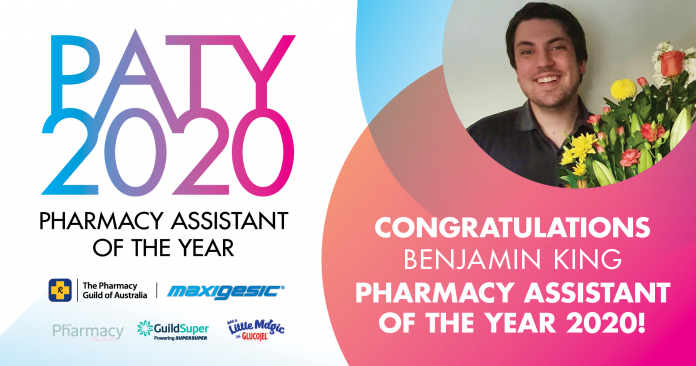 Following a virtual national judging day help on 30 October 2020, Benjamin King, pharmacy assistant from Alice Springs Pharmacy in Northern Territory has taken out the top honour and has been awarded the Pharmacy Guild of Australia/Maxigesic Pharmacy Assistant of the Year (PATY) Award. 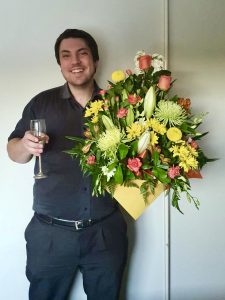 Selected from more than 460 nominated pharmacy assistants and eight state/territory winners, Mr King was commended for his positive attitude and commitment to ongoing training and development – his enthusiasm and passion towards the pharmacy industry, along with his dedication to his role as a pharmacy assistant setting him apart from a strong cohort of pharmacy assistants.

“Benjamin has been recognised as always going the extra mile with customers and staff members, which is critical to the futures success of the pharmacy industry as our range of services to the public continues to grow,” says Pharmacy Guild of Australia National President, George Tambassis, who congratulates Mr King for his valuable contribution to community pharmacy.

“The calibre of PATY nominees this year has been extremely high, and each PATY finalist has displayed a strong commitment to their work and the industry in what has been a very challenging year for everyone in Australia.”

“While the quality of the award candidates was once again extremely high, Benjamin was the stand-out pharmacy assistant in the award competition this year,” says Mr MacKenzie.

“I congratulate all eight State Winners for standing out as their state’s top pharmacy assistants who are driving the industry forward.

“AFT Pharmaceuticals is very honoured to support PATY and to ensure that the industry is recognising excellence in the frontline of pharmacy.”

Mr King takes home more than $10,000 in prizes, including cash, a training package, educational opportunities and other great rewards.

“I am so happy I could bring it home for the Northern Territory. A huge congratulations to all the other contestants – I am incredibly thankful I got to meet them,” says Mr King.

“Without my customers I would be out of a job – the people of Alice Springs are the heart of Australia.

“A big thank you to my team at work who have been supportive and helpful in preparing me.”

In addition to the National PATY Award, pharmacy assistant, Amber Greenwood from South Australia has been named as the National Glucojel Super Star Award winner.

As part of this year’s award, AFT Pharmaceuticals and Maxigesic has created a complimentary education module called “Pharmacy assistants’ role in pain management”.

This can education module be accessed by signing up at: pharmacyassistants.com/education/.