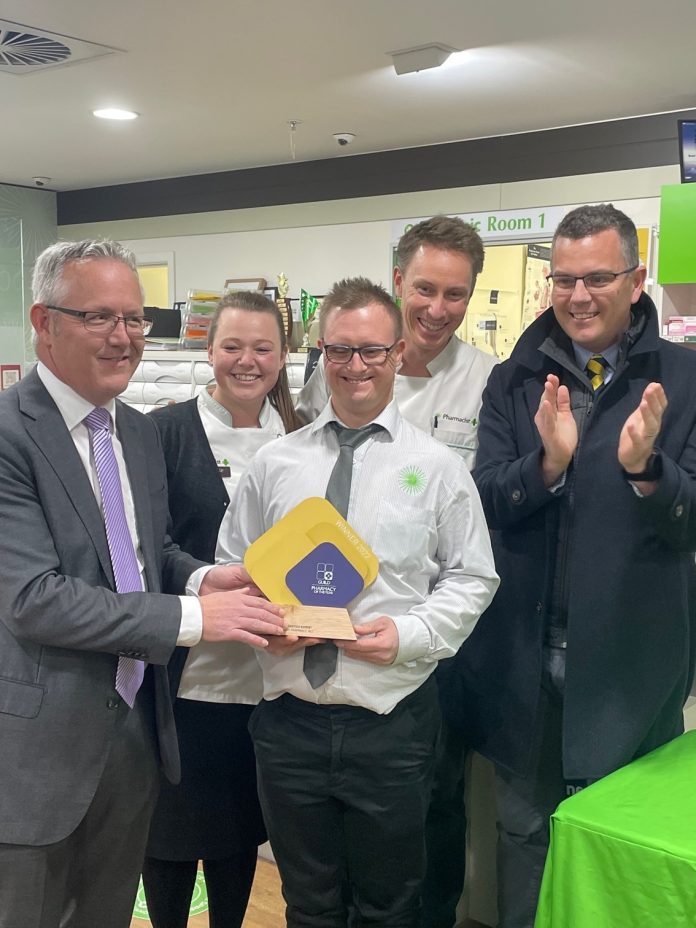 A staff member of the Pharmacy Guild of Australia’s Pharmacy of the Year, Cooleman Court Pharmacy, in the ACT has been honoured in a special presentation at the pharmacy, which was held on 22 June.

Co-proprietors, Brad Butt and Brooke Veasey, along with Pharmacy Guild National President Trent Twomey, presented staff member Daniel Lewis with a replica of the Pharmacy of the Year trophy in recognition of his efforts at the pharmacy.

Mr Butt said Daniel was an integral member of the pharmacy staff and was the “robotics expert” who helped the practice run smoothly.

“What Daniel doesn’t know about the pharmacy robotics side of our operation is not worth knowing,” he said.

Ms Veasey said Daniel was an extremely popular member of the staff and much loved by all the pharmacy’s patients.

“He has a warm welcome for everyone and knows all our regular patients and makes them all feel as if they are part of the pharmacy family,” she said.

Professor Twomey said Daniel’s role was an important one and reflected the pharmacy’s genuine commitment to following through on the principles of diversity.

“Brad and Brooke have incorporated the profession’s commitment to diversity into their pharmacy in a practical, respectful and pragmatic way,” he said.

Daniel said he was proud to work at the pharmacy.

“It is an important job. Having a job makes me feel good, happy and part of a great team,” he said.

Daniel’s mother, Sylvia Kaltner, said having the pharmacy job gave him a sense of belonging and the team was wonderful with him.

“I never dreamt he would have this type of employment as for many years after school he was working in what they used to call a ‘sheltered workshop’ and was paid not a great deal but now he is equal to everyone else and gets paid for the work he does,” she said.

“I couldn’t be more proud of him. He takes his job very seriously. In life I just wanted him to be happy in whatever employment he got. And this one has been the best.

“The pharmacy’s win as Pharmacy of the Year was unbelievable; the dedication and teamwork the staff has, is amazing – they go above and beyond to all their customers.

“Daniel was so proud to be a part of the celebrations, to be included. He told everyone he works for the top pharmacy. His words: ‘Mum! The Pharmacy won the award.’ He was so happy to be up on stage holding the award with [proprietors] Brad and Brooke. To him, that is a sense of belonging to a wonderful team.”

Executive Officer of the ACT Down Syndrome Association Shannon Kolak said: “People with Down syndrome want to work for the same reasons as everyone else – so that they can be independent, contribute to society, earn their own money, learn new skills, meet new people, and feel valued.

“Down Syndrome Australia has developed resources for employers, providing information about adjustments that can be made to support people with Down syndrome in paid employment.”