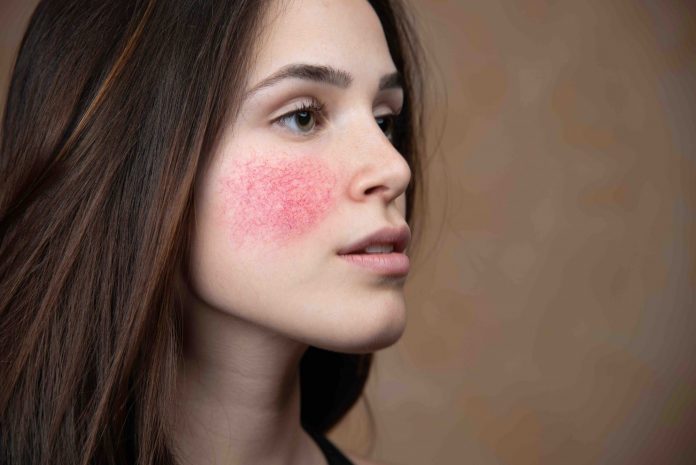 Rosacea affects more than 40 million people worldwide1, and if left untreated, the disease may worsen over time.

The condition causes redness, both temporary and permanent, and often small, red, pus-filled bumps on the face. Other symptoms of rosacea include itchy/sore/red eyes, dry appearance, itching, pain/stinging or burning, and a red, swollen nose.

Australian dermatologist and rosacea specialist Dr Belinda Welsh says common symptoms of rosacea can be easily overlooked, “which is why it’s important to raise awareness and provide those who may need medical advice with the support and treatment they need”.

The call for more awareness comes as 70 per cent of those in a survey who have suffered from rosacea say they wish more people understood the impact their skin condition has on their day-to-day life.2

The symptoms and impact of rosacea are more than skin deep. Global research released by Galderma in 2020 found half of those with rosacea who were surveyed reported that their disease had at least a moderate impact on their life and one in three felt their rosacea had a very large or extremely large impact on their life.3

Australian research launched during Rosacea Awareness Month in April found that 66 per cent of survey respondents who have experienced rosacea admit the condition had a negative impact on their mental health.2

Worrying about how their skin looks “all the time” was found to be a particular concern for younger generations, with 73 per cent of Gen Z respondents and 66 per cent of millennial respondents admitting the impact can be felt on a daily basis.

The study also revealed that skin condition sufferers feel most conscious in their day-to-day life when viewing their mirror reflection (34 per cent), in social settings (27 per cent) and while meeting new people (27 per cent).

This feeling of self-consciousness is accelerated online through social media platforms, with 48 per cent of surveyed Australians with skin conditions advising that social platforms make them more self-conscious about how their skin looks compared with others.

“We need to work to help break the taboo around skin conditions and ensure people feel confident to reach out and visit their GP or dermatologist,” Dr Welsh said.

Rosacea can be successfully managed, so it’s important for those with symptoms to seek the medical support they need.

Disease symptoms and treatment regimens will vary depending on the type and severity of rosacea present and the individual factors that trigger the disease. Following appropriate diagnosis by a medical professional, different topical treatments can be prescribed, together with general skincare measures and the avoidance of known trigger factors, such as exposure to UV light.

“Some agents work by constricting blood vessels, thereby reducing facial flushing. Other agents have anti-inflammatory and anti-parasitic properties, which reduce the inflammation, papules and pustules that may be associated with some types of rosacea, and the frequency of flare-ups.”

Patients with rosacea frequently have sensitive skin that is easily aggravated. For this reason, a gentle skincare regimen should always be adopted in conjunction with prescribed treatments, to reduce skin irritation and improve compliance with therapy, says Mr Kon.

“Skincare should include daily use of a gentle facial cleanser and moisturisers, such as [Galderma’s] Cetaphil Gentle Skin Cleanser and Cetaphil moisturising cream or lotion,” he said. “In addition, as sun exposure is known to be a trigger for rosacea flare-ups, a broad-spectrum sunscreen should be used routinely, such as Cetaphil UVA/UVB Defence SPF50+.”

Conversely, he adds that rosacea patients should avoid products containing ingredients that may irritate the skin further, “such as salicylic acid, AHA, BHA and topical retinols”.

“One of the issues with treatment of rosacea is treatment adherence, and pharmacists play an important role here by reinforcing the need for the daily application of topical treatments as well as recommending a simple and gentle skincare regimen for patients,” he said.

“Patients should see their local GP for ongoing advice on how best to manage their rosacea.”

Galderma is encouraging those experiencing symptoms of rosacea to visit a GP or dermatologist for a full diagnosis and plan.

For more information and resources on rosacea, visit faceuptorosacea.com.

The findings from Galderma’s survey reveal sensitive skin is a growing concern for many in Australia2.

In addition to the pressures of social media, the pandemic has also impacted skin conditions. Sixty-one per cent of surveyed people with skin conditions feel their skin has become more sensitive over the past two years, with 33 per cent claiming that wearing a face mask has irritated their skin condition.

As rosacea sufferers call for more awareness around their condition, 76 per cent of those surveyed would also like to see more investment in research into treatments and possible cures for their skin conditions.

This feature was originally published in the May issue of Retail Pharmacy magazine.