Food and prizes from postponed APP event, donated to most deserving

The Pharmacy Guild of Australia, Queensland Branch has donated 200 teddy bears to the Children’s Hospital Foundation, in hopes to put smiles on the children’s faces.

Earlier on in the year the Australian Pharmacy Professional Conference (APP) was forced to be postponed due to the current social restrictions. 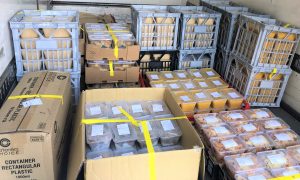 The teddy bears, which are usually utilised as prizes for the delegates, are now in well-deserving hands.

“The Guild wanted to give something back to the community…

“We are happy that the bears, which are highly sought after at APP, have now been used for a greater purpose.”

The Guild, in partnership with the Gold Coast Convention and Exhibition Centre (GCCEC), has also donated food which was to be consumed by APP delegates to charity organisations.

The Centre had prepared around 15,000 meal portions which were distributed to the area’s local agencies including OzHarvest and Love This City, a charity arm of OurChurch.

Love This City spokesperson, Ruth Arnold says, “The kindness and thought has been a wonderful boost both practically and emotionally and mentally for the recipients.”

APP Convenor, Kos Sclavos concludes: “There are a lot of people doing it tough right now, and we are happy to be able to assist is some capacity.”