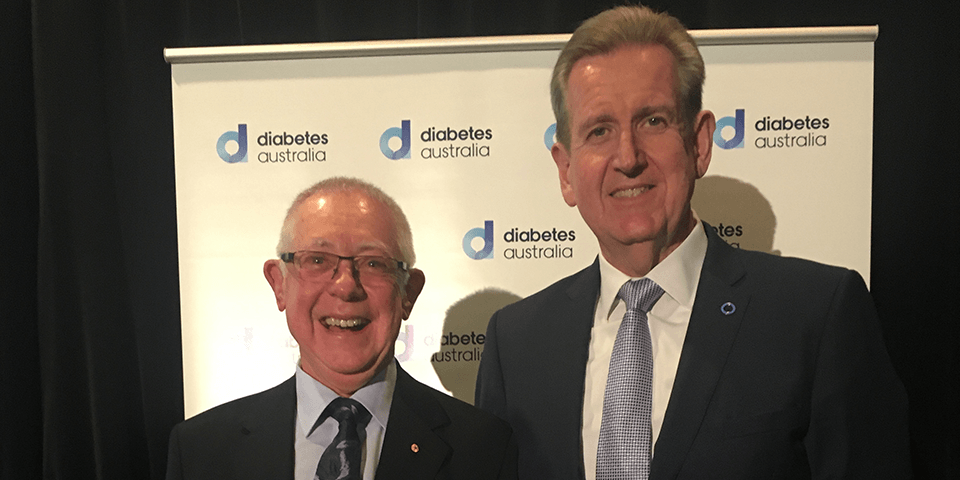 Pharmacist John Bell, former national president of the Pharmaceutical Society of Australia, has received the Sir Kempson Maddox Award, which is described as Diabetes NSW and ACT’s most prestigious honour.

PSA NSW Branch President Professor Peter Carroll says the award is further recognition of Mr Bell’s extensive contribution not only to the pharmacy profession but also the broader healthcare system.

The award, established in honour of Diabetes NSW and ACT’s founder, acknowledges people who have made a significant contribution to the diabetes movement.

“As a former board member of Diabetes NSW, John has spent many years working to raise awareness of diabetes prevention and treatment strategies,” Professor Carroll said.

“He has been a strong advocate for community pharmacists to take a greater role in diabetes management.”

Mr Bell says that although diabetes is the fastest growing chronic condition worldwide, it can be effectively managed with a combination of lifestyle modification and appropriate pharmacological therapy.

“With more than 300 people diagnosed with diabetes in Australia every day, pharmacists have a critically important role to play in increasing awareness, identifying symptoms and assisting with strategies to reduce the risk of complications,” he said.

Mr Bell has taken an active role in international pharmacy for more than 30 years, including eight years as vice president of the Federation Internationale Pharmaceutique (FIP).

In 2004 he received FIP’s highest honour, the Andre Bedat Award for services to international pharmacy practice.

Mr Bell was made a Member of the Order of Australia in 1993 for services to pharmacy and in 2017 he was awarded PSA’s Lifetime Achievement Award for his contribution to the pharmacy profession and the Australian and international communities.

While still an active partner in his pharmacy practice, Mr Bell teaches at the Graduate School of Health at the University of Technology Sydney, and serves on PSA’s NSW branch committee.

Effects of exercise on metabolism greater than realised

The effects of exercise on metabolism are even greater than scientists believed. This is according to a study published in Cardiovascular Research, a journal of...
Read more
Health

MA and GBMA working together for continue supply of essential meds

Medicines Australia (MA) and the Generic and Biosimilar Medicines Association (GBMA) will be working together after the ACCC has granted conditional interim authorisation to...
Read more
News

South Australian researchers are testing a vaccine candidate against the SARS-CoV-2 coronavirus responsible for the COVID-19 pandemic. The team is headed by Nikolai Petrovsky, Flinders...
Read more
Health

The National Asthma Council is urging the 2.7 million Australians living with asthma to vaccinate against influenza now, ahead of the peak period and...
Read more