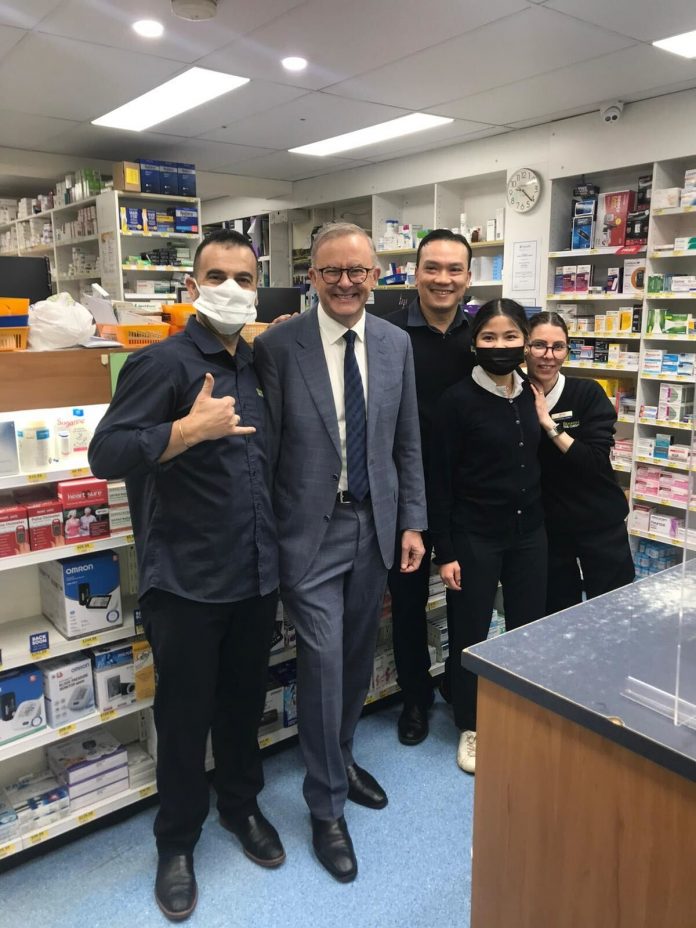 It could have been any ordinary day when the team at Blooms The Chemist Marrickville looked up to see the country’s new Prime Minister, Anthony Albanese at the dispensary waiting to be served.

The Prime Minister had just stepped off the plane from his much-publicised visit to Japan for the Quad meeting and walked into the pharmacy this morning to pick up a few items.

“I’d heard that he was in Japan, so it was a surprise to see him appear in the Pharmacy this morning,” said Blooms The Chemist Marrickville Pharmacist-owner, Andrew Ioannou.

“The PM said he’d literally gotten off the plane and had to stop by our Marrickville store to pick up a few items.

“He is a regular of ours, so it wasn’t a total surprise to see him – the difference was, last time he was in here, he was just our local Member for Grayndler, now he’s our Prime Minister as well.”

The Marrickville store is very multicultural, which reflects the makeup of the suburb. The pharmacists and pharmacy assistants come from a range of cultural backgrounds including Greek and Vietnamese.

“It’s a great melting pot in Marrickville and it’s a huge benefit that our Blooms The Chemist team can communicate and converse with the locals in their language, especially the elderly clients who sometimes struggle with discussing their health and medication needs in English,” Mr Ioannou said.

Medication affordability was a topic of discussion during the election campaign and both the Coalition and Labor made pledges to cut the maximum general PBS co-payment to make medicines more affordable for most Australians. The Albanese Government promised a cut from the current $42.50 to $30.

One of Blooms The Chemist’s core values is to provide accessible and affordable pharmacy health care to all Australians.