Type 2 diabetes is the most common form of diabetes in Australia, affecting around one million people, according to Accredited Practising Dietitian and Dietitians Australia spokesman, Dr Alan Barclay. Given these stats, in this month’s issue of Retail Pharmacy magazine we took a look at what can happen when diabetes gets complicated.

“It generally happens as we get older, so it’s most common over the age of 45, though some young people can get it,” says Dr Barclay. 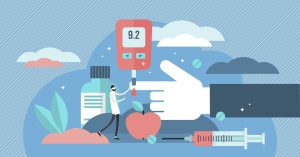 Pharmacist and herbalist Gerald Quigley adds that the “number of people diagnosed with diabetes each day is phenomenal”.

He points to the ‘Australian Diabetes, Obesity and Lifestyle’ study in 2005, which found that about 275 adults were developing diabetes every day in this country.

“It’s a dreadful disease and it’s immensely controllable [yet] we ignore it,” says Mr Quigley.

Pharmacists Donna Itzstein and Alison Crow, credentialled diabetes educators at Diabetes Queensland, describe type 2 diabetes as “a metabolic condition, which is a product of genetics, age and lifestyle issues”.

They say the development of type 2 diabetes involves the body gradually becoming resistant to the effects of insulin.

“Some insulin will be produced, but the amount will be inadequate for glucose metabolism,” they say.

Mr Quigley adds that a person with type 2 diabetes “can be producing insulin but it’s not being used effectively by their body”.

Providing further explanation, Dr Barclay says: “The pancreas gets to the point where it can no longer produce enough insulin, which is the hormone that lowers blood glucose levels, and therefore blood glucose levels start to go up. So, you still produce insulin but just not enough.”

People with type 1 diabetes don’t produce insulin. This is “an autoimmune condition” that “may occur at any age”, say Ms Itzstein and Ms Crow.

“A trigger such as an illness or physical stress sets off an immune response in which the body attacks and kills off its own cells in the pancreas,” they said. “This results in an absolute insufficiency of insulin.”

Experts agree that managing blood glucose levels, and keeping them within the optimal range – “6 to 8mmol/L if you’re fasting, in the morning for example, or 8-10mmol/L two afters after a meal”, according to Dr Barclay – will help to reduce chances of developing diabetes complications.

“There’s very good evidence from randomised control trials around the world that if you keep your blood glucose levels under control then you can reduce your risk of developing complications like diabetic neuropathy,” says Dr Barclay.

“It’s not inevitable. [Diabetic complications] can be prevented if you manage your condition well. That of course is easier said than done. If you try very hard and you’re working with your diabetes team, then hopefully you can manage it well enough to keep the complications away.”

Lui et al, in the research article, ‘The risk factors for diabetic peripheral neuropathy: A meta-analysis’, published in PLOS One (2019), state that “diabetes peripheral neuropathy is the most common cause of neuropathy worldwide [and that] it is estimated to be present in approximately half of those with diabetes, and 10-20% have symptoms that are severe enough to warrant treatment”. 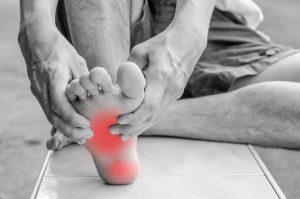 They add that while “patients with diabetes are extremely difficult to treat once they develop neuropathy … appropriate interventions can reduce ulcers by 60% and amputations by 85% in those with high-risk DPN”.

According to Mr Quigley, DPN “can happen and is a total result of poorly controlled blood glucose levels”.

“So, that sort of person loses their ability to sense temperature and pain – so you can [easily] burn yourself.”

Dr Barclay says DPN “seems to happen over time, so it’s thought to be due to high blood glucose levels”.

“If you haven’t been managing your diabetes well for a long period of time then the slow accumulative damage can affect the nerves and blood vessels in the lower limbs,” he says.

Ms Itzstein and Ms Crow suggest the following strategies “to prevent or further damage (especially to the feet)”:

The role of the pharmacist

When it comes to diabetes, Mr Quigley says it’s all about teamwork.

“Pharmacists should be leaders … and very important partners within the team,” he says.

“Managing diabetes doesn’t mean you take someone’s prescription, dispense their medication and give it back to them. It’s more than that.

“Diabetes is another condition where the pharmacists should develop a prescribing personality.

“You should have a string of things that you can go to, and if one doesn’t work you can then move to another, and you have a pattern and you build your professional expertise by maintaining and assessing constantly.”

To read the full feature as it appears in the July issue of Retail Pharmacy magazine, visit: https://retailpharmacymagazine.com.au/magazine/.