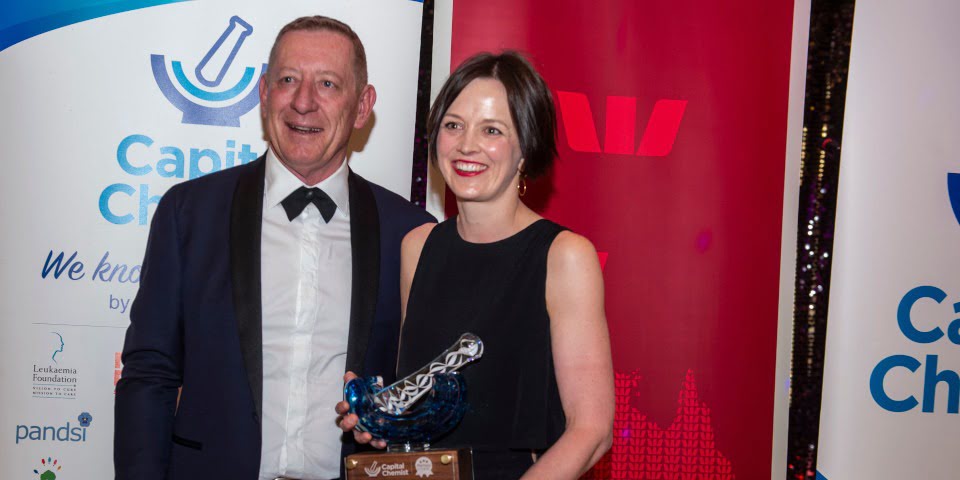 Capital Chemist Chisholm in the ACT has won the group’s Pharmacy of the Year award, presented at the Museum of Australian Democracy in Canberra.

The competition focuses on 39 parameters that Capitol Chemist believes are representative of success, including growth, services development and implementation, demonstration of core values, customer service and pharmacist access.

The award was presented in front of about 350 guests, staff and owners by Westpac Senior Relationship Manager Geoff Weir.

“Of course, it’s essential that I acknowledge the efforts of my staff, and the support given by head office.” she said. “We don’t operate in isolation. We work as part of the Capital Chemist group and this award shows exactly what’s possible.”

In addition to being the Retail Manager at Southlands, Ms O’Dea works behind the scenes at many Capital Chemist community events, as her son is the ‘body’ of the Capital Chemist mascot, Billie Bilby.

Capital Chemist in the ACT promotes its diverse program of support for around 40 charities and community organisations, with an award being introduced this year that recognises the pharmacy deemed to have shown the greatest commitment to this community spirit. Stores were graded on their efforts towards such community activities as a bake sale at a school fete or a major event such as MS Swimathon, or Relay for Life.

“These awards are the showcase of years of hard work,” Capital Chemist Group Business Manager Andrew Topp said. “The winners of all the awards have shown a dedication to the Capital Chemist model of community engagement, service and advice, and excellence in professional services.”