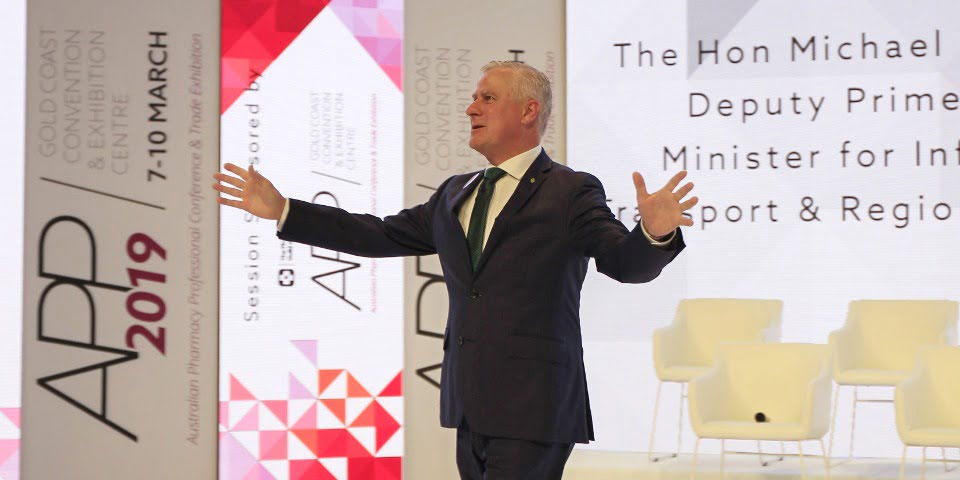 In essence, Mr McCormack confirmed that the Government is committed to supporting and helping pharmacists, healthcare professionals and the Australian families they serve.

Choosing to speak, as he put it, from the heart, Mr McCormack addressed a number of topics of interest to Community Pharmacy and Healthcare professionals and started by acknowledging the Guild and its National President George Tambassis.

“I’d like to start by thanking George for the wonderful role that he plays nationally for your organisation, and he does,” Mr McCormack said.

“We recognise that as a government, we recognize that as MPs, and I certainly do. It doesn’t matter what political persuasion you are, because we need to make sure pharmacists are looked after, because you look after our communities, and communities are number one.  They have to be.”

Mr McCormack shared his views on the PBS and how the shape of the economy is a significant factor in the management of the PBS.

In response to an earlier speech from Mr Tambassis, Mr McCormack acknowledged many of the issues that he raised.

“I know we heard this morning from George Tambassis, and he is right. There are issues with scripts. There are issues with the pharmacy agreement that we always thrash out.  The fact is, we are doing our level best to make sure that you can do what you do fantastically well, for and on behalf of our communities, particularly our rural and regional communities. But we want to make it as easy for you as possible and we want to make it easy for the families of Australia.

“We want to make it easy for you to serve them, and cheaper for them to get their scripts and their medicines.

“That’s why I was delighted that yesterday Greg Hunt announced that $200 million windfall for you. That’s a good thing. I also appreciate the fact that you’re going to get paid sooner. That’s a tremendous thing too.

“We are making sure that we get the tax rate down to 25 per cent at a progressively continuous rate. That will be the lowest tax rate that small business such as yours will have been paying since 1940 which is 79 years and I’m pretty proud of that.

“So, we want to make sure that we continue to do the right thing by you.”