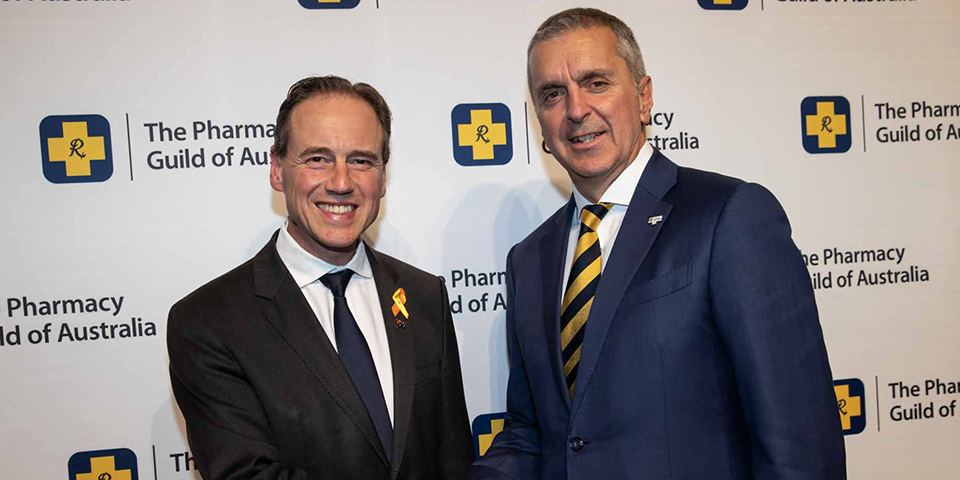 Health Minister Greg Hunt spoke candidly about the work pharmacists do on an everyday basis and the vision he has for community pharmacy in primary healthcare at the annual Pharmacy Guild of Australia Parliamentary dinner held in Canberra earlier this week.

While praising Lucy Walker, the 2017 Guild Pharmacist of the Year, for her flu vaccinations’ program in the rural community of Goondiwindi, Queensland, Mr Hunt referred to “pharmacies being a critical deliverer, not just of medicine, but of comprehensive healthcare within the scope of practice”.

This year, Ms Walker’s pharmacy vaccinated 1500 people in a town whose population numbers 5000.

“That is the sign of a trend of increasing healthcare,” Mr Hunt said. “The proof is in the fact that, over the last two years, we’ve gone from eight million flu vaccinations in Australia to 13.2 million. With two million of those now being delivered in pharmacy on the latest figures … you are helping to expand health services in Australia.”

Mr Hunt also used current community pharmacy programs such as dose administration aids and diabetes care as an example of when community pharmacy can make a difference and lay the foundation for discussion about the next agreement.

Definitely “not on the table” in the new negotiations for the seventh community pharmacy agreement (7CPA) are the location rules, which supermarkets have lobbied in order to see a change and, most recently, the petrol and convenience sector has joined in, hoping the rules would be relaxed.

“One of the most important things we’ve done was to remove the sunset clause,” Mr Hunt said, “and the reason we did that was to give you certainty, and therefore bankability, over your businesses. We recognised the valuable role of community pharmacies and we value certainty.”

“It means that people will get free medications earlier, but without detriment to any of the pharmacies involved,” the minister said.

The 7CPA negotiations, which began “in earnest” this week, are based on three principles: certainty, simplification and collaboration.

“We’re developing a model which, hopefully, will see that we set what we believe to be the remuneration through the negotiations and discussions, which is fair and reasonable,” Mr Hunt said.

The second principle the minister referred to was simplification and safety based on the payment system.

“We’re not trying to cram too many different things, and to use more of the AHI as a simple mechanism, then to make sure that we are focusing on the critical community pharmacy needs around aged care, dose administration, diabetes and pain meds check,” he said “Things which we can agree on as being fundamental to the communities.”

“I think that having the primary healthcare system working together will be a transformative moment for Australian healthcare,” he said. “The truth is, they already work very well together, but it can be better and that is the majestic vision that we want to work on with you over the coming year.”