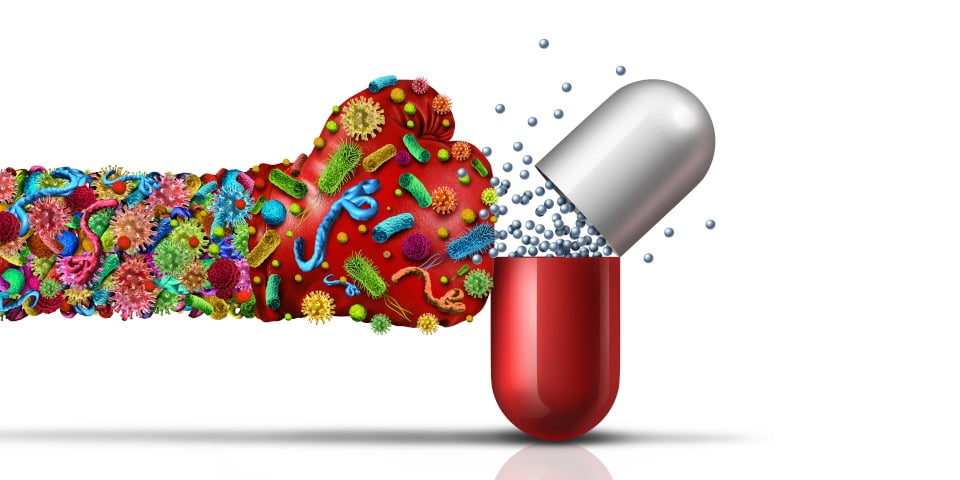 The most comprehensive report produced on the use and resistance trends of antimicrobials in Australia has found that their use in the community is falling, but they continue to be overprescribed, while some dangerous bacteria are growing increasingly resistant to common antibiotics.<intro>

The report, Antimicrobial Use and Resistance in Australia 2019 (AURA 2019), released by the Australian Commission on Safety and Quality in Health Care today (May 10), is the third such report in this country and highlights a number of resistant bacteria as major healthcare problems.

AURA 2019 warns that antimicrobial resistance shows little sign of abating and poses an ongoing risk to patient safety. There are concerns common pathogens such as E. coli, Salmonella, Neisseria gonorrhoeae and Neisseria meningitidis are becoming increasingly resistant to major drug classes, and some organisms are resistant to last-resort treatments.

Antimicrobial resistance is driven by the overuse and misuse of antibiotics. Encouragingly, AURA 2019 found that overall use of antibiotics in the community fell between 2015 and 2017, the first decline in 20 years. This suggests ongoing and coordinated campaigns targeting GPs and consumers on the risks of using antibiotics inappropriately are beginning to gain traction.

Despite these gains, almost half the samples of enterococci tested across Australia were resistant to the antibiotic vancomycin – a level higher than seen in any European country. AURA 2019 also found that community-associated methicillin-resistant Staphylococcus aureus (MRSA) has become the most common type of MRSA infection, particularly in aged care homes and remote regions.

The report found that in 2017, more than 10 million Australians had a least one antibiotic dispensed in the community and more than 26.5 million prescriptions for antimicrobials were dispensed.

“While the downward shift in prescribing will help to slow the spread of resistance, these latest AURA findings indicate that the levels of inappropriate prescribing of antibiotics in hospitals and the community are still too high and there is more work to be done,” AURA Clinical Director Dr Kathryn Daveson said.

AURA 2019 provides a more comprehensive picture of antimicrobial resistance than previous reports because of the increased volume of data now captured by the AURA surveillance system.

“The expanded AURA surveillance system allows us to identify and track national trends in antimicrobial use and antimicrobial resistance and monitor the effect of changes in policy and clinical practice, to a level that has not previously been possible.

“This latest report is one of the most comprehensive of its type in the world. It will help give clinicians and health policy makers across Australia the data and information they need to develop targeted approaches to prevent and contain resistance.”