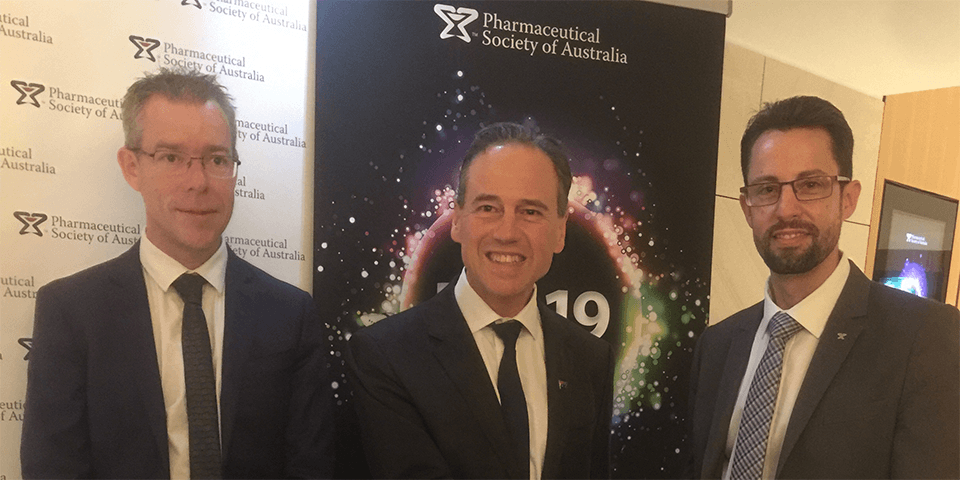 The PSA19 National Conference was opened today with the Federal Minister for Health Greg Hunt confirming the importance of the role of pharmacists.

“We now have a prime minister, a treasurer and a finance minister, who when they define what is the purpose of a strong economy, beyond the individual work and dignity, they agree before, all others that it is the medicines that you help dispense and provide to the PBS.

“It’s a very interesting place for pharmacy debate. Right at the top of the thinking of the Prime Minister, the finance minister, and the treasurer, in terms of what actually transforms lives for the better in Australia.

“And I think that that’s a good thing. And we’re always looking to make sure that there is a balance around safety, but it’s in good hands with yourselves,” Minister Hunt said.

Further speaking about the government’s 10 year vision for health and Minister Hunt said with the following key initiatives:

The Minister also confirmed that it is the Pharmacy Guild of Australia that the government will work with for all remuneration for pharmacists, while working with the Pharmaceutical Society of Australia in an advisory role only.

“So the heads of agreement on the National Health Act has to be done with the Guild for the remuneration elements. So those are the actual legislative requirements. And so that is the circumstances and then in terms of the code of ethics, services, and delivery practice we will work with pharmacists and the PSA,” Minister Hunt said.