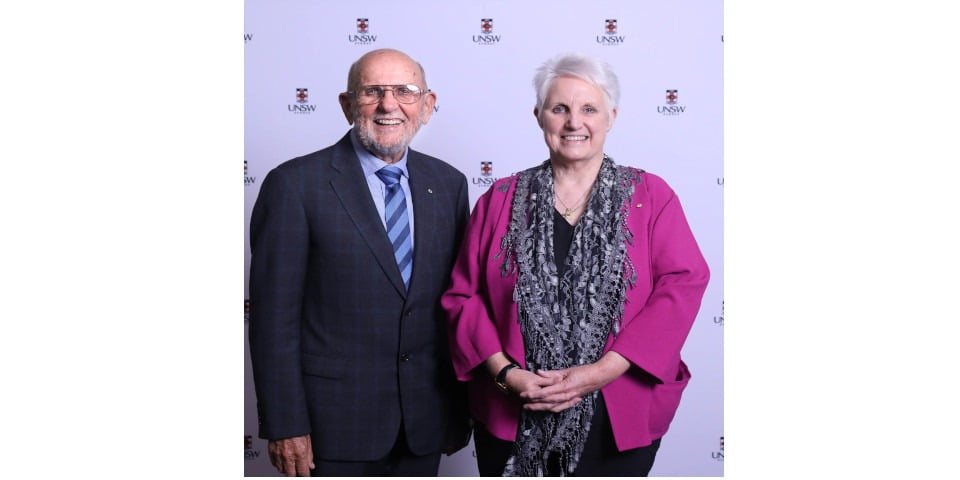 They received their awards from youth mental health advocate and former Australian of the Year Professor Patrick McGorry at UNSW Sydney last week in recognition of their major contributions to mental healthcare.

Ms McMahon, founder and Executive Officer of the Private Mental Health Consumer Carer Network (Australia) (PMHCCN), is a consumer advocate with a focus on the area of borderline personality disorder.

Emeritus Professor Gavin Andrews is an innovator, clinician, teacher and researcher who retired earlier this year after a career in mental health spanning 60 years.

Ms McMahon has pursued better outcomes for people living with mental illness since 1997. The PMHCCN is the recognised peak Australian advocacy organisation for the private sector. She has appeared before 10 parliamentary inquiries and been a member of numerous expert reference groups, committees and working groups.

Ms McMahon was instrumental in improving understanding and awareness of borderline personality disorder (BPD) in Australia.

“The good news story is that recovery is possible if people are able to access good care and support,” she said. “I am passionate about ensuring that the voices of those with a lived experience are heard, particularly in relation to how services are delivered.”

Ms McMahon secured agreement from the Australian government for the development of the NHMRC Clinical Practice Guidelines for BPD and was also a member of the development committee. She has led the BPD National Training Strategy and lobbied politicians for the funding and establishment of the South Australian BPD Centre of Excellence where she is a member of the Executive Steering Committee. She has also worked with the Royal Australian and New Zealand College of Psychiatry to develop a consumer and carer guide for BPD.

UNSW Sydney says the lifetime work of Gavin Andrews has had a fundamental impact on the way mental disorders are diagnosed and treated in Australia and around the world today. The university adds that Professor Andrews, who officially retired earlier this year from his role as professor of psychiatry at UNSW after 60 years of dedication to mental health, is among the world’s most highly cited scientists in this field.

Professor Andrews’ research interests began with stuttering and extended to depression, epidemiology and treatment and classification of common mental disorders. He is responsible for preparing the first ever set of clinical practice guidelines in psychiatry and the first National Survey of Mental Disorders, which helped to quantify the breadth and scope of mental illness in Australia.

“I believe the majority of people who develop a mental disorder today can be cured,” Professor Andrews said.” Essentially, they will be able to say, ‘that’s not a part of my life anymore’.

“If you’re not improving after 30 days, ask why. Cure is possible, and we as clinicians, patients and their families must pursue it energetically.”

Younger Australians and their American counterparts are dying of cardiovascular diseases due to excess weight, according to new a research from the University of...
Read more
Health

An international research study led by the Centre for Healthy Brain Ageing (CHeBA) at UNSW Sydney has provided further support to the finding that more years...
Read more