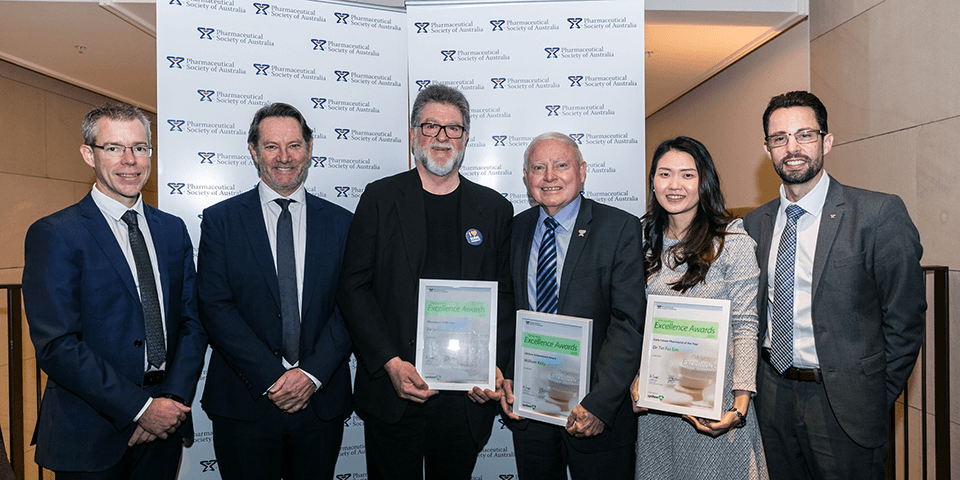 Three outstanding pharmacists have been honoured for their high standards of commitment and
professionalism in the 2019 PSA Excellence Awards.
The Early Career Pharmacist of the Year, Pharmacist of the Year, and Lifetime Achievement
Award were announced at PSA’s flagship conference PSA19 in Sydney today.
PSA National President Dr Chris Freeman said he was delighted to congratulate this year’s
award winners.
“The Excellence Awards show the impact pharmacists have throughout the various stages of
their careers,” he said.
“What unites today’s winners is not only their commitment to the profession and innovative
practice, but their dedication to improving patient outcomes.”
The 2019 PSA Excellence Awards winners are:

 Pharmacist of the Year – Peter Crothers, NSW.
 Lifetime Achievement Award – Col (Rtd) Bill Kelly, ACT.
 Early Career Pharmacist of the Year – Dr Fei Sim, WA.
In accepting her award, Dr Sim spoke of her many influencers and mentors who have helped
shape her career. She said not only was the award very meaningful to her, but it was also
recognition that she was on the right path.
“I see it also as an acknowledgement of the great mentorships I have received from my mentors
and the amazing team I work with every day, at Curtin University, Caring Pharmacy, PSA and
the communities,” she said.
Mr Crothers said his award was recognition of the work of rural community pharmacists and
highlighted the unique career opportunities to be gained in rural pharmacy.
“One of the best ways to become highly clinically competent is by combining formal learning with
rural practice – especially remote rural practice – where you’ll be exposed to more patient intimate and collaborative models of care and a wider range of clinical, logistical and other
situations that you must ‘own’ and deal with,” he said.
Lifetime Achievement Award winner Col. (Rtd) Bill Kelly commented on the greatest change he
has observed in the profession over his career.
“It has undoubtedly been the change to a more clinical, responsible and responsive role to the
provision of health care with not only an increased emphasis on medication management
through various initiatives such as medication reviews and the like but also now with pharmacy’s
immunisation role and the potential to work to an enhanced scope of practice,” he said.
The award winners each receive a Symbion Education Grant valued at $9,000. The grants are
possible thanks to Symbion’s long-standing support of the awards.
CEO Symbion Brett Barons said the PSA Excellence Awards provide much deserved
recognition of those pharmacists who have made a substantial contribution to the profession.
“On behalf of everyone at Symbion, we extend our congratulations to this year’s winners and
thank them for their dedication and for inspiring all sectors of the profession,” he said.
“As a proud sponsor for the past 15 years, we are delighted to be supporting their ongoing
education and efforts to provide an exceptional level of care to the community.”
Videos of the award winners are available on PSA’s YouTube page https://www.youtube.com/user/pharmsocaus/videos