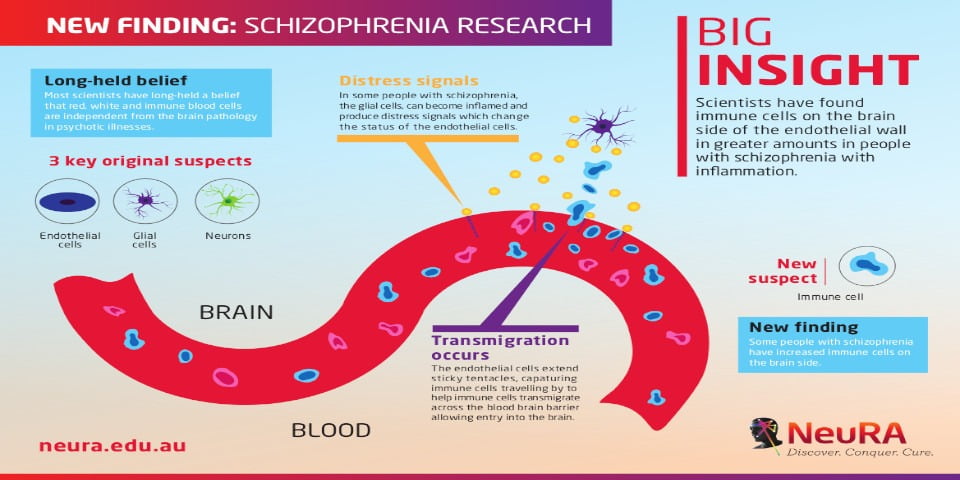 In an important discovery, Professor Cynthia Shannon Weickert at Neuroscience Research Australia (NeuRA) has identified that immune cells are found in greater amounts in the brains of some people with schizophrenia.

The study she led, findings from which were published this week in Molecular Psychiatry, has the potential to change global schizophrenia research and open new avenues for developing targeted immune cell therapies.

One in every 100 Australians lives with schizophrenia. No single cause of the condition has been identified, which has prevented the development of a cure. The current treatments for schizophrenia are designed to suppress symptoms rather than target underlying causes of the disorder. These drugs only partially relieve symptoms and can produce unwanted side effects.

To recognise the significance of this discovery, Professor Shannon Weickert says it first needs to be understood that most scientists have had a long-held belief that immune cells are independent from the brain pathology in psychotic illnesses.

“In our study, we challenged this assumption that immune cells were independent of the brain in psychiatric illness, and made an exciting discovery,” she said. “We identified immune cells as a new player in the brain pathology of schizophrenia.”

Current schizophrenia research has focused on the status of three brain cells: the neurons; the glial cells, which support the neurons; and the endothelial cells, which coat the blood vessels. Employing new molecular techniques allowed Professor Shannon Weickert and her team to identify the presence of a fourth cell, the macrophage, a type of immune cell in the brain tissue of people with schizophrenia who show high levels of inflammation.

“Immune cells have previously been ignored as they had long been viewed simply as travellers just thought to be passing by, undertaking surveillance work,” she said. “They have never been a suspect until now.

“We have observed in people with schizophrenia, the glial cells, one of the local residents, become inflamed and produce distress signals, which change the status of the endothelial cells.

“We think this may cause the endothelial cells to extend sticky tentacles, so when the immune cells travel by, some are captured. These cells may transmigrate across the blood-brain barrier, entering the brain in greater amounts in some people with schizophrenia compared to people without the disorder.”

This discovery shows that specific immune cells are in the brains of some people with schizophrenia in close enough proximity to the neurons to do damage.

NeuRA CEO Professor Peter Schofield says the new research has the ability to alter the way in which we may be able to diagnose and treat schizophrenia.