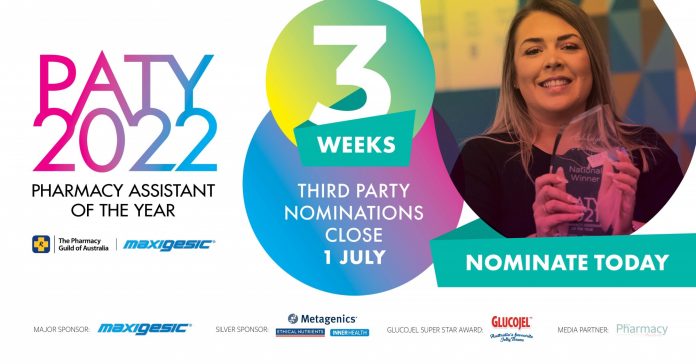 The PATY Award is the premier award for Australian pharmacy assistants, recognising and celebrating the ‘best of the best’ in community pharmacy across a 12-month period.

The National President of the Pharmacy Guild of Australia, Professor Trent Twomey, says PATY recognises outstanding pharmacy assistants and at times whose contributions to patients’ wellbeing can be understated.

“I encourage other pharmacy owners like myself or others within the industry, to nominate a pharmacy assistant to recognise their dedication to work, commitment to patients and their integral role in the community pharmacy team,” says Professor Twomey.

“Third-party nominations can be submitted by pharmacy owners, pharmacists, industry representatives and other pharmacy assistants.

“Last year it was third-party nominations that commenced the award process for both Ashleigh Hutson and Donna Williamson, respective winners of the 2021 PATY Award and National Glucojel Super Star Award,” says Professor Twomey.

The third-party nomination process is all online with a straightforward entry form, which takes less than 10 minutes to complete.

Pharmacy assistants nominated by a third party will be required to respond to their nomination to be in the running for the 2022 PATY Award.

Aside from holding the prestigious title of Pharmacy Assistant of The Year, the winner will receive a prize package that includes a custom glass trophy, $5,000 cash, a training package provided by The Pharmacy Guild, return flights and accommodation to APP2023 and PA2023 Conferences and an invitation to participate as a judge in the 2023 PATY National Judging Workshop.

“If you know a pharmacy assistant deserving of the Pharmacy Assistant of the Year Award, submit your nomination before 1 July 2022 via pharmacyassistants.com/paty.